The Freedom Trail, Fenway Park, and lobster rolls. Boston is one of the cities in the United States to visit since it offers historic sites, great sports teams, and kid-friendly attractions. The question is, how much does it cost to go to Boston? You might be surprised to learn that Boston is one of the more expensive cities in the U.S. to visit. That said, it’s definitely worth it if you’re looking for a quick break.

For the purpose of this itinerary, I’m going to suggest three nights in Boston. It’s likely just enough time for you to see all the major attractions and even a sporting event. If you have time, book an extra day, but 3 nights should do.

The above estimate is for a single traveller in American dollars, so please use xe.com to find out the average costs in your home currency.

If you’re Canadian, you may want to consider applying for one of the best travel credit cards in Canada to help offset your costs by collecting points. For example, the American Express Platinum Card gives you a generous welcome bonus that’s often worth more than $900 (potentially more if you transfer your points to Aeroplan or Marriott Bonvoy). There’s also the Scotiabank Passport Visa Infinite card that has no foreign transaction fees, and it comes with airport lounge access.

Generally speaking, flights from within the United States to Boston shouldn’t run you more than $350 for a return ticket. Those on the east coast shouldn’t have too many problems finding a flight in the $200-$250 range, but if you’re flying from the west, you should budget a little more. Even though Boston is a major city, it’s not a major hub.

Discount carriers such as JetBlue, Frontier, Allegiant Air, Southwest Airlines, Spirit Airlines do fly to Boston so finding reasonably priced airfare shouldn’t be too difficult. Canadians based in Toronto can fly to Boston via Porter which is typically cheaper than Air Canada and WestJet. If you’re travelling from an international destination, you’ll obviously need to budget even more.

I’m going to suggest you budget $300 for your flights as most people travelling to Boston aren’t coming from too far.

From hostels to luxury hotels, Boston has every type of accommodation possible. Generally speaking, $200 a night will get you a mid-range hotel, but you can obviously spend more or less than that. Downtown Crossing, Seaport, and Fenway are the more popular areas for visitors.

If you’re trying to keep costs down, you could go further and get a hotel around South Boston, Harvard, or Cambridge. That said, there are reasonably priced accommodations in many of the popular areas, but it may be a longer walk to the metro. Here are some hotel recommendations

If you have the right credit card, you can save a fair amount of money on hotels. Americans should strongly consider the Marriott Bonvoy Brilliant American Express Card since you can earn up to 150,000 Marriott Bonvoy points and $300 back at U.S. restaurants as a welcome bonus.

Canadians should consider the Marriott Bonvoy American Express which gives you up to 55,000 Marriott Bonvoy points. That’s enough points for a few free nights at some hotels which could easily have a value of over $500.

Boston has excellent public transportation which is run by the Massachusetts Bay Transportation Authority. You can get around the entire city, including to/from the airport just by using public transit.

To get onto any bus or subway, you’ll need to purchase a CharlieTicket. This is a one time ticket that costs $2.40 each way for the subway and $1.70 for the bus. It’s valid for 2 hours and you can transfer once for free as long as the transportation you’re transferring to costs less than your original fare. E.g. Subway to bus.

CharlieTickets can be purchased at any fare vending machine (found at every station). Children 11 and under ride for free with a paying customer (up to 2 children per customer).

Passes are available and cost the following:

From museums to historic walks, Boston has tons of attractions that will keep you busy the entire time you’re there. Even if you’re in town for a specific reason such as a sporting event, it’s worth checking out what the city has to offer. One of the best deals on attractions is the Boston CityPASS. For $64, you get access to the following attractions at a discount of 45%.

Other paid attractions worth considering include:

Keep in mind that not all attractions in Boston come with an admission price. There are many free things to do including:

Overall, I would recommend budgeting $75 for attractions, but you could easily spend much less.

Boston is a very diverse city so you’ll have no problem finding any cuisine you can think of. A lobster roll from the Faneuil Hall Marketplace or Quincy Market is a must even though it’s arguably overpriced. How much you spend is up to you, but this is what I recommend you budget each day.

That’s a total of $50 a day which admittedly sounds like a lot, but I find Boston to be an expensive city. Dinner assumes you’re sitting down at a restaurant, so you need to factor in tax and a tip. If you get takeout for everything, you could reduce your costs.

I personally don’t think you should cheap out on food. Sure, you could probably save $60, but you’re only going to be there for three days. Is saving $20 a day that important? I’d rather not worry about it and spend my money on great food such as clam chowder, cannolis, Boston cream pie, and Fenway franks.

If you’re visiting Boston, it’s highly unlikely you’re going to spend a lot on shopping, but you’ll want to set aside an extra $100 for any random expenses that come up. You may decide to go see a few extra attractions or you might want to enjoy some of Boston’s cool coffee shops.

The extra $100 could also cover the cost of getting around if you don’t want to take public transportation. As for souvenirs, there’s nothing really that stands out about Boston unless you’re a fan of one of their sports teams.

So how much does it cost to go to Boston? I recommend budgeting US $1,280 but you can likely shave $100-300 depending on where you stay, what you eat, and how much you’ll spend on random expenses. Boston is indeed an expensive city, but it’s a great alternative to New York City, Chicago, and Toronto. 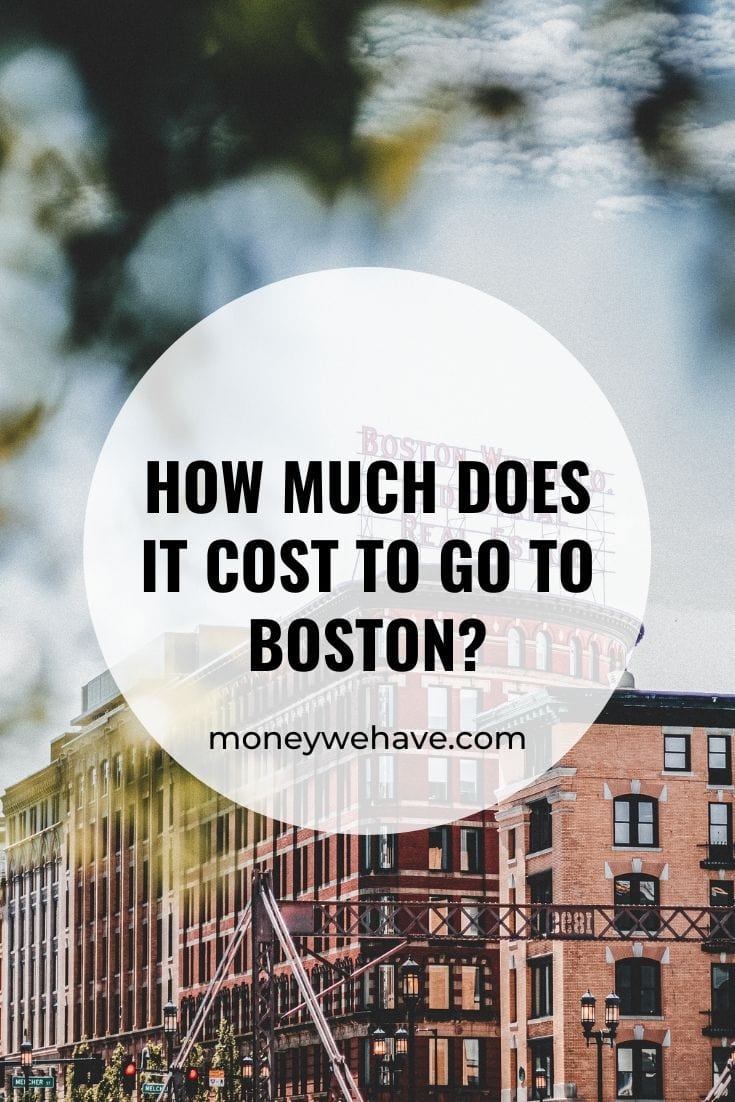